Synaptic plasticity - A match made in synaptic heaven (PRESS RELEASE)

Activity-dependent modifications in the efficacy of the synaptic connections between nerve cells form the basis of learning and memory. A new study shows that the changes on each side of a synapse are orchestrated to match up with each other in the long term. 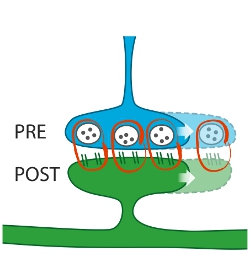 Synapses are the bridges connecting the cells of the nervous system, and the information processing that is required for every action and thought relies on the transmission of signals across these bridges. The majority of synaptic connections in our brain are composed of two distinct opposing physical structures, the pre- and post-synaptic terminals. Neural signals are mediated by a probabilistic release of quantized packets of chemicals from the pre-synaptic terminal. This chemical signal diffuses across the intercellular space and activates the opening of ion channels in the postsynaptic cell, thus propagating the flow of electrical current. How strong a synaptic connection is depends on how many packets can be released at a time, how high is the probability of release of one packet, and how much current flow a released packet induces.

Lasting changes of these synaptic components due to neural activity, known as long-term synaptic plasticity, are considered to be the physiological basis of learning and memory. Therefore, these changes have been the focus of intense research. ”On the basis of indirect measurements, it has long been hypothesized that, over time, the changes occurring in pre- and post-synaptic cells undergo a process of adaptation, such that a rise in the neurotransmitter pool on one side is matched by an increase in the number of docking sites, and hence in the current flow, on the other,” says LMU’s Professor Andreas Herz, neurobiologist and spokesman for the Bernstein Center for Computational Neuroscience.

Indirectly, this hypothesis is supported by various attributes of synaptic connections. For example, synapses with larger post-synaptic terminals also have larger pre-synaptic terminals that include more packets. However, a direct proof of the hypothesis had been missing. Until now. “The breakthrough came when we applied a new analytical method, which I had developed to investigate the properties of synapses, to data collected by Swiss colleagues before and after 12-hour periods of neuronal activity,” says Dr. Alex Loebel, a member of Herz’s group and first author of the new study.

Indeed, the researchers were able to do more than just confirm the hypothesis. “We discovered that even if a synaptic connection ended up to be 10 times stronger, or 10 times weaker, the pre- and post-synaptic changes still matched each other with exquisite precision”. That is, if the overall post-synaptic response potentiated, for example, by a factor of 10, the number of pre-synaptic packets increased by the same factor as well. Hence, the post-synaptic response to each packet was the same before and after a change was induced, suggesting that synaptic plasticity on long time scales results from the addition, or removal, of elementary transmission modules that span the synaptic cleft.

“One step forward in understanding synaptic plasticity, there are still many questions to answer”, says Loebel. For example, how do the opposing synaptic terminals communicate with each other, such that the changes on both sides are so finely matched? What are the necessary molecular cascades that are involved in this intricate process? And which features of neural activity lead to the observed changes, which are up to 10 fold and even higher? These are only few of the exciting questions that remain open.